Let Them Hear Your Youth Voice 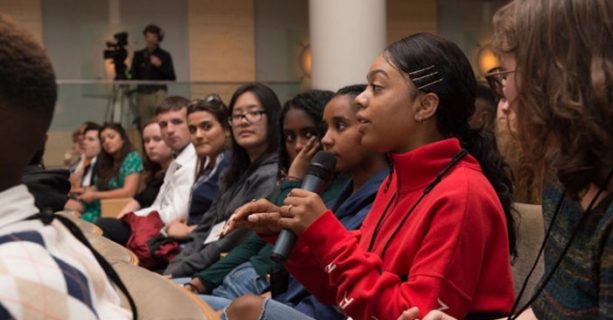 At the beginning of June we mentioned that RAWK was asked by the International Congress of Youth Voices to send two delegates to their inaugural event in August. RAWK decided to send RAWK participant and Youth Advisory Council member Sydney Rotigel-Finegan along with our very own Volunteer Coordinator Destiné Price. Since this event was the first time uniting hundreds of youth from across the nation and across the globe, along with various guest speakers, it was an honor to send two youth who are such strong advocates for change, who are driven, and who use their words and writing as platforms for bigger conversation.

I was able to check in with Destiné upon her return to find out what this experience meant to her and how she will carry it with her for years to come. Destiné was ecstatic when she found out she would be one of the two youth from RAWK going to San Francisco as she shares, “I don’t recall a time in my life that I had felt so invested in, believed in. That the first person RAWK thought of sending was me! It was a memory and feeling that I would never forget.”

In preparation for San Francisco, aside from packing, Destiné went through all of the delegates’ bios and was in awe of each individual, eager to meet all of them. They were students, writers, young activists – a group that would tempt anyone to immerse themselves among. Aside from making connections, Destiné knew she would be at the conference for a weekend of learning and she felt that from her time there she was able to see certain issues differently while also breaking out of her shell to talk with different folks.

At the International Congress of Youth Voices, a significant component is youth action. Destiné spent time being a part of a youth-led action Friday where she learned “a lot about being in the moment with action.” She expresses that, “[She learned about] [b]eing present and aware. Being proud of where [she has] grown in navigating spaces of power while staying grounded in [her] intentions and mission.” These lessons and more are what Destiné has already brought back to Kalamazoo with her from the conference, along with the words of so many powerful and beautiful individuals that she was able to have a conversation with. She says that the highlight of her time in San Francisco was reading a poem she had written a day before her departure flight. “I don’t think I’ve ever felt so much of myself in that moment and I really value that I got to experience that with so many amazing people.”

Destiné has been able to bring back a lot with her from San Francisco that she can apply at work with RAWK and within her personal life. She says that she has jumped on the bandwagon with networking extensively and speaking on everything that is wrong when she feels compelled to. This is something I admire about Destiné. Many times in our society, youth are told their voices don’t matter, that we should just put up with the conditions we find ourselves in. It is also often frowned upon for women, especially women of color, to push back against individuals and systems that may be hindering their growth and potential. I am inspired by how charged Destiné feels and how unapologetic she is when addressing issues she is passionate about. She states, “Engage and act have been two powerful words that have been driving me for the past two weeks.” Let these two words drive also you, unapologetically, through your work and your words.