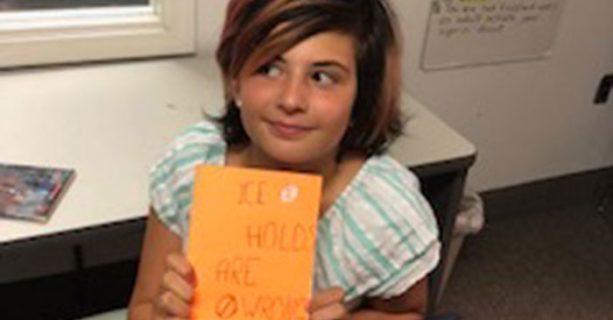 Last Wednesday, RAWK partnered with Kalamazoo’s very own City of Kalamazoo Parks and Recreation (Parks and Rec) program. We worked with the 8 to 10-year-olds, with hopes of carrying out RAWK’s mission, to celebrate and amplify youth voices through the cultivation of reading and writing skills via joy, creativity, equity, and access. This mission was upheld as RAWK taught youth at Parks and Rec how to create their own book with their own world, regarding something that they were passionate about. In doing so, one of the students from Parks and Rec, Susanna Day Lee, used this opportunity to write about an issue that is relevant to many individuals today: ICE Holds.

ICE holds occur when an immigrant with no legal status is arrested or detained for any reason by local law enforcement authorities and Immigration and Customs Enforcement (ICE) may place a “hold” on that person. This means if a friend or relative attempts to pay a bond to have the person released from jail, local authorities will not release them but rather hold them to allow ICE to transport them to an ICE Detention Center.

Susanna was inspired to write about ICE holds from her personal experience with the system. Susanna’s mother’s church have advocated against the unjustified ICE holds after encountering a woman named Saheeda who would have been deported to almost certain danger had it not been for the help of her mother and the people of the church. Susanna’s mother’s church began providing a sanctuary for the woman who was facing deportation about a year ago. This sanctuary is only possible because police are not legally allowed to arrest persons in a church.  Susanna’s story describes the woman’s story and how she, her mother, and the congregation fight for justice for this woman and protect her and anyone to come after her.

For more information about Saheeda and her struggle for safety, visit protectsaheeda.org